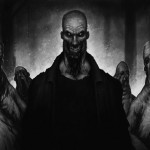 What is Sleeper Duty:

The worst duty for any Shiver is the Sleeper Tour. Sleepers are Shiver squads who take an APC into Downtown and occupy an allotted area for six months. The APC is provisioned with enough food and ammunition for several weeks. The Shivers report back to base once a day by radio as they patrol the depths of Downtown, where SLA Industries is nothing more than a name.

A Sleeper squad is made up of 10 Shivers, one of whom will be a sergeant. The individual Shivers take turns manning the communication, computer and gunnery systems, with the others either resting or patrolling their given area. Two of the passenger spaces within the APC are converted into bunks; they take it in turns to make use of them. The Shivers take Drum to provide sufficient rest on this long and exhausting tour of duty. Each APC carries large supplies of the drug, and the sergeant dish it out as and when they deem it necessary.

Every Sleeper APC holds a pair of tiny cells, little more than upright coffins that prisoners can be locked in. These are used when the APC is far from the nearest Station and needs to bring a captive back. For preference, the Sleeper squad will simply call for back-up from the nearest Station and let them deal with any trouble they come across quickly and harshly, leaving the soft approach to their colleagues who are based at a Station.

Whenever supplies start to run low, the Sleeper squad will head towards the nearest Station to restock before going back onto the streets. Apart from getting supplies and dropping off prisoners, Sleepers have no personal contact with other Shivers or Stations.

It is standard practice, if against regulations, for a Sleeper APC to hold non-standard weapons. Most Shivers (and all Sleepers) carry a weapon other than their Browbeater. The Browbeater is all well and good but, in most Shivers’ opinions, it is nothing more than an overgrown “pea-shooter”. The Sleeper squads like to have something with a bit more stopping power. No Sleeper would consider beginning a tour without being certain that every member of the squad had a side weapon to complement their issue rifle.

In the deepest and most dangerous parts of Downtown, far from Shiver Stations and Obervation Centres, Sleeper squads patrol the streets enforcing the laws of SLA Industries. These regulations are not appreciated by the residents of the area, and the Shivers are regarded as fair game for anyone that cares to take on a fully armed APC. Unfortunately, there are plenty of people disturbed enough to do this, and the mortality rate amongst Sleeper squads is high.

Being on edge for six months solid is extremely stressful. By the end of the tour, the squad can no longer recognise mistakes. They take risks that they would normally avoid, their reactions have slowed down, and much of the rigorous training and obedience that has been drummed into them has been forgotten. It is common for Sleepers to use drink or drugs to release tension and the ragged crew members coming off a tour are a far cry from the efficient company employees that started it.

Living in a confined space with nine other people for six months brings pressures all of its own. The sergeants of Sleeper squads have been trained to cope with psychological problems and personality clashes, but tempers still run high. It is not unusual for fights to break out amongst the crews, and these have occasionally ended in one or more deaths.

Despite all the problems and the risks involved, the Sleeper squads are a vital part of the Shiver organisation. They take SLA law to the parts of Downtown that are not normally accessible to either Shivers or Operatives.

This entry was posted in SLA Industries. Bookmark the permalink.