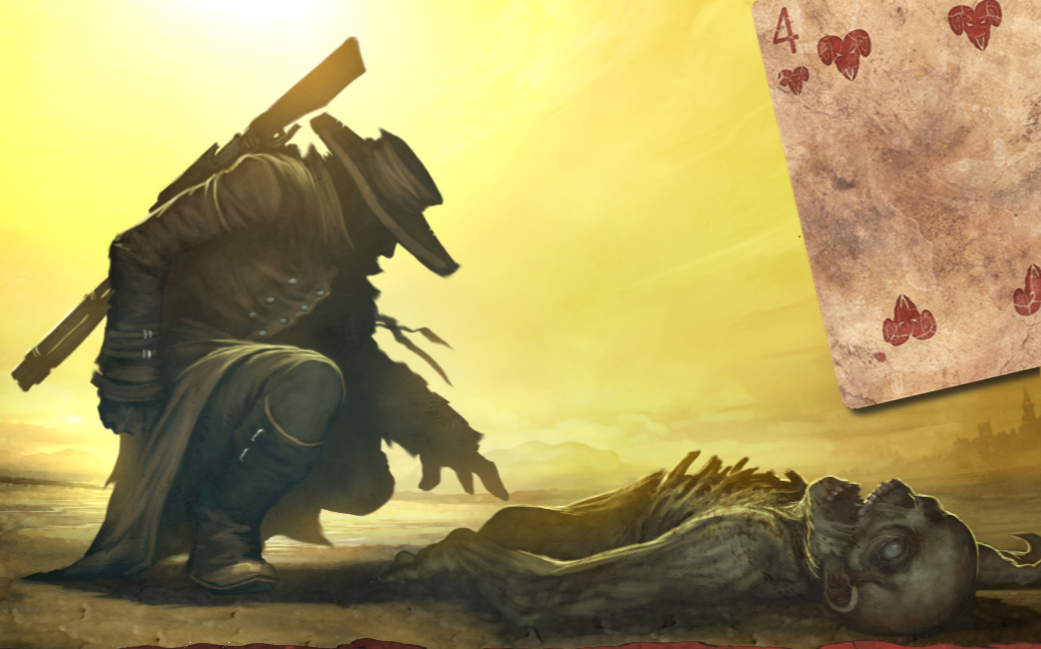 Through the Breach is a tabletop roleplaying game set in the world of Malifaux. The players take on the role of the Fated, men and women who have caught a brief glimpse of their destinies.

This destiny is created alongside the Fated during character creation, and it affects every aspect of the character’s life, from the day they were born and into the future. As the game progresses, the destinies of the Fated entwine, creating a campaign with a finite end. With each session, the character’s final fate grows ever closer, and in the end, it is up to them whether they embrace their destiny or attempt to cheat fate out of its prize.

Through the Breach uses cards instead of dice to resolve conflicts, and each character has a hand of cards they can use to alter their destinies, changing failure into success and defeat into victory. Characters shift fluidly from one profession to the next as they meet the challenges of Malifaux head-on, and even the most naive Academic might find herself becoming a lethal Gunslinger, hardened Pioneer, or power-mad Dabbler with the right twist of fate.

Through the Breach takes place in the world of Malifaux, where steam power collides with magic, monsters, and the wild west. The world of Malifaux is adjacent to Earth, and a portal known as the Breach allows free passage between the two worlds. Those arriving through the Breach will find the Gothic city of Malifaux waiting for them, and this city serves as the backdrop to many of the adventures that take place in Through the Breach. The world is larger than just the city, however, and players might also explore the rolling Northern Hills and its many mining towns, the fetid and swampy Bayou, or even the desolate Badlands.

Malifaux City is under the direct control of the Guild of Mercantilers, a tyrannical government that is far more concerned with Malifaux’s Soulstones than the well-being of any of the people living within the city. Soulstones are one of the few ways that people back on Earth can tap into the magic which infuses Malifaux, and as a result, each Soulstone is worth a small fortune. The Guild ships Soulstones back to Earth by the trainload, and this has given them unprecedented power and control back on Earth.

Despite all their power, the Guild doesn’t have the manpower or expertise to dig the Soulstones out of the ground themselves. Some of this back-breaking work is performed by the convicts which the Guild regularly ships into Malifaux, but the majority of it falls onto the shoulders of the Miners and Steamfitters Union. The Union is an organization of miners and engineers who have come together in the interests of protecting their workers from unsafe working conditions and unfair pay. Because the Union controls so many mines (and can speed up or shut down the excavation of Soulstones on a whim), they have become a political power in their own right, and conflict between the Union and the Guild is common.

The Union is not entirely benevolent, however, for it shields the Arcanists, a terrorist organization who believe that mankind is entitled to wield the power of magic as they see fit. Malifaux is a magical world, and those who pass through the Breach or spend any significant time in Malifaux sometimes spontaneously develop magical powers. The Guild considers these people to be a threat to its stability and the Arcanists fight back using their magical powers and steam-powered constructs. The Guild’s brutal policies concerning magic users – often going so far as pulling them out of their beds at night – have resulted in the public looking upon the Arcanists as a group of good-hearted revolutionaries, an image which the Arcanists have latched onto to disguise their extensive black market smuggling operations.

Another sort of magic user stalks the shadows of the city. Known as Resurrectionists, these madmen and psychopaths use necromancy to transform the dead into loyal zombie servants. The sewers beneath the city are filled with the discarded experiments of these twisted necromancers, but anyone with the desire to raise the departed could become a Resurrectionist. It’s said that there’s a haunting voice that speaks to these people, whispering the secrets of necromancy into their ears even as the knowledge shatters whatever is left of their sanity.

There are other threats in Malifaux – the sinister Neverborn that lurk in the shadows, the mysterious masked ninja who stalk the streets of the Little Kingdom slums, the drunken and chaotic Gremlins who call the Bayou their home – but these are kept hidden from the people back on Earth. To them, Malifaux is the frontier, a place where one can leave the sorrows of Earth behind to start a new life. Hundreds of people come to Malifaux each week in search of this dream, but for many, the world on the other side of the Breach holds only nightmares.

Through the Breach uses cards instead of dice to resolve the actions of the Fated and those around them. The basic rules are simple: flip a card from the deck, add the character’s Skill rank and Aspect modifier, and compare it to the total of the opponent. The highest total wins the conflict, with increasingly greater margins of success leading to greater magnitudes of victory.

The player characters – or Fated, as they are called – each belong to a Pursuit, which functions as a combination of class and profession. Pursuits are fluid, with the characters choosing which Pursuit they wish to follow at the start of each session, after a short prologue. This allows the Fated to prepare themselves for the adventure to come; sessions with lots of combat will result in Fated who have chosen more martial Pursuits, while investigative or social adventures will find the Fated well-matched to uncovering the correct clues or charming the right people.

At the end of each session, the Fated character gains an ability based upon the Pursuit they played on that adventure. This allows characters to grow organically in multiple directions, as a product of their adventures. For instance, take a look at Pedro Ortega, who primarily adventures as a Gunslinger, save for a few sessions where he decided he could do more good as a Performer. He’s still a quick shot and deadly with his pistols, but his dazzling smile and friendly demeanor easily smooth over those delicate social situations that can’t be solved by just shooting someone.

Each Fated character possesses a destiny, which give the Fatemaster vague, cryptic phrases that can be used to build an entire adventure. In this way, each session’s focus tends to focus on a single character as they resolve a step of their destiny with the help of their friends and allies. As the Fated travel together, their destinies weave together into a communal story, shifting its focus back and forth in the manner of an television show featuring an ensemble cast.

Whenever a Fated character resolves a step of their destiny, their strengthening destiny begins to manifest itself in various effects. For some characters, this results in an increase to their physical or mental abilities, pushing them well beyond the capabilities of normal humans and into the realm of the truly exceptional. Other characters develop Manifested Powers, unique magical abilities that the player can tailor specifically to match their character and the events surrounding their Fated’s destiny. Spectral bullets that pass through walls, a voice that puts others to sleep, the ability to animate the dead with a single touch… the only limit is the player’s imagination (and the sanity of the Fatemaster).

This entry was posted in Malifaux. Bookmark the permalink.

19 Responses to Through the Breach